Forum rules
There are a few things you should know before posting in these forums. If you are a new user, please click here and read carefully. Thanks a lot!
Post Reply
1919 posts

Here is a song that references a switchblade. I do have to warn you, though, the song is anti-switchblade.
https://www.youtube.com/watch?v=6k3I2fh-8VQ
Top

There is some song out now on a rock station that says suck in on a switchblade, maybe its a new name for a crack pipe. Go figure.
Last edited by sammy the blade on Wed Jan 08, 2020 5:36 pm, edited 2 times in total.
Top

The latest Purge move ("Election Year") has the hero Secret Service guy dispatching baddies with a push dagger that looked all black to me, like it was some sort of xray proof non-metallic. In the culminating fight he pulls what looked like an Italian stiletto, maybe 11" - but then it disappears like he dropped it and then went back to the push dagger. So I don't know if he was supposed to have two knives (logical) or this was simply bad editing and prop selection.
Dave Sause
oldandfat@cox.net
(405) 694-3690

"And you're telling me this because, somehow, I look like I give a shit?"

"Let a smile be your umbrella and you're gonna get your dumb ass wet."
Top

I've been watching the much talked about "Stranger Things" Netflix series and it's very good in my opinion. Definitely depicts the setting well (small Indiana town in the early 80's) and a good story also. Sort of a mishmash of E.T., Stand By Me, X-Files, etc. but well done and the characters are good. Anyway I think it is episode 5 there is a scene where a kid pulls a switchblade and threatens another kid with it. It's hard to tell exactly what kind of knife it is, it's shown several times but I couldn't really tell. Possibly a NATO style otf but maybe something else. Also the Sheriff character has a tactical side opening knife that also seems to be a switchblade. Boker style maybe.
Top

I found another switchblade yesterday whilst watching IP man 3.
Its starring Donnie chen and is about the life of Bruce Lees teacher ,Yip man ,and Wing chun,a bramch of kung fu.
In a scene at a dockyard in Hong kong ,a baddie(as usual),pulls a switch I cant identify it, looks to be a large side opener and possibly due to sound effects ,it fires really hard.
Possibly more rare and bizarre, is Mike Tyson is in it ,speaking chinese and does battle with ip man.
Take a look ,the fighting if its your thing is decent,with yhe help of todays technology.
Ill try and get a picture of the blade.
Ian
Top

There was a Italian stiletto in the Rifleman I saw yesterday. It looked like a 13" bayo with a horn handle but I couldn't be sure.....
Top

Tom19176 wrote:There was a Italian stiletto in the Rifleman I saw yesterday. It looked like a 13" bayo with a horn handle but I couldn't be sure.....

Interestingly I have seen several stilettos used on the Rifleman, from a small (possible) 8" up to a 13" so they had a few in their props department.

I rarely watch tv but the computer has been my main source of entertainment for several years now. There are quite a few obscure websites with thousands of movies and two of them have a huge selection of Westerns going back to the 20's all the way up to today, however it seems they cannot make a western these days, they rely on the young, good looking actors and and almost painful to watch with the over-acting and huge effects.
Last decent western I saw was barely watchable but I got through 3:10 to Yuma. I am just a die-hard old school western guy and Clint made the very last quality western as far as I'm concerned.

I caught this scene in Stick which I would say is one of my favorite Burt Reynolds characters. Dar Robinson plays Moke an albino hitman and performs one of the best stunts in history. He falls off a building, reaches for his pistol and fires as he is falling.
He questions a prostitute and threatens her with what looks like a Rizz.

Here is a clip of Moke (Robinson) falling off the balcony- https://www.youtube.com/watch?v=RiKy3ktxw6M 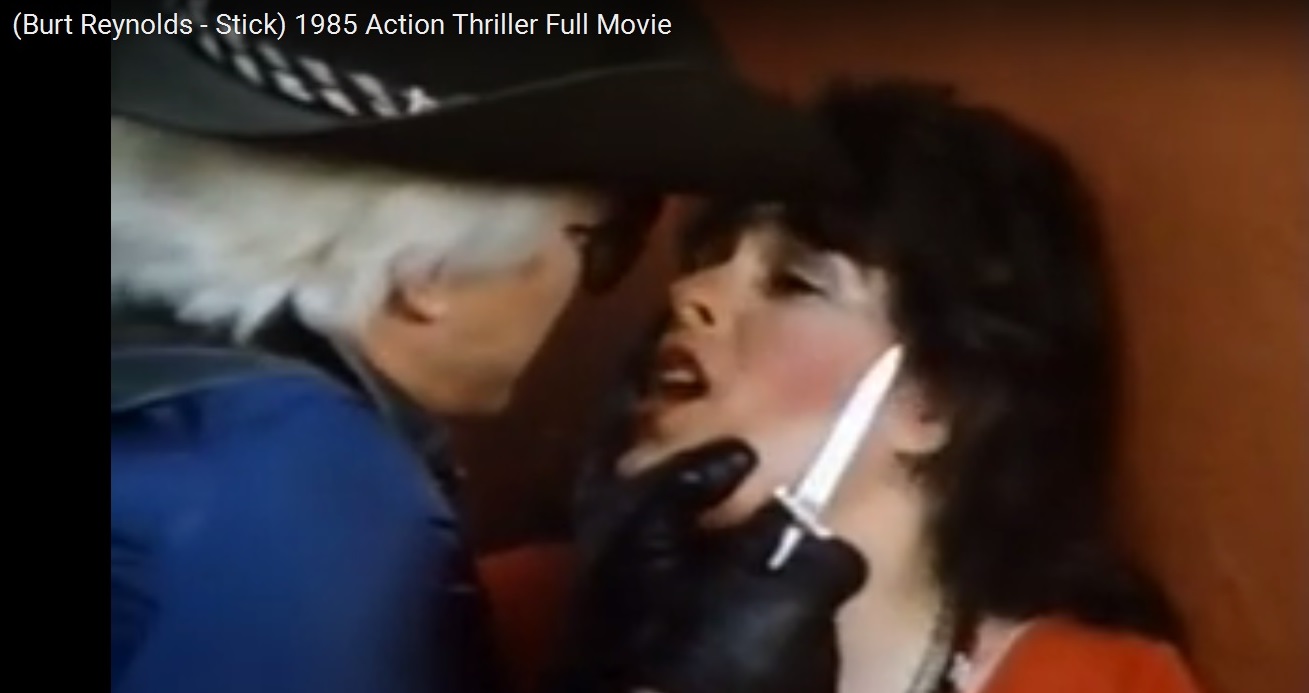 Forth episode called "Pursuit of the Po Ho" These Po Ho captured Dr. Quest in the jungle and Race rubbed purple berry juice all over himself to scare the savages and he snaps open his knife to cut holes in their boats. 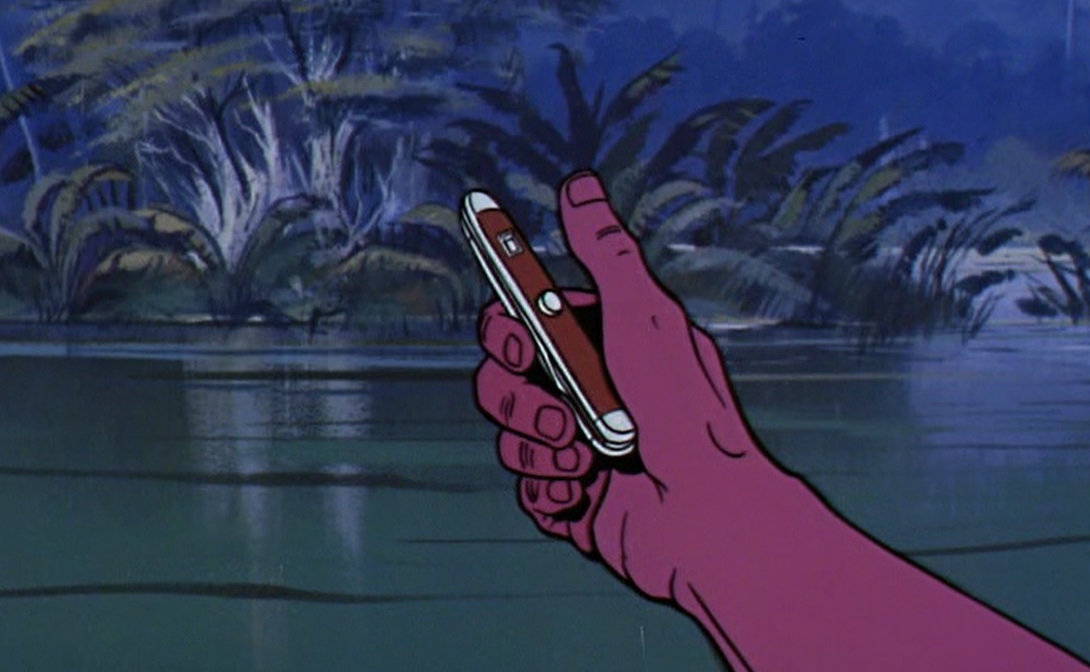 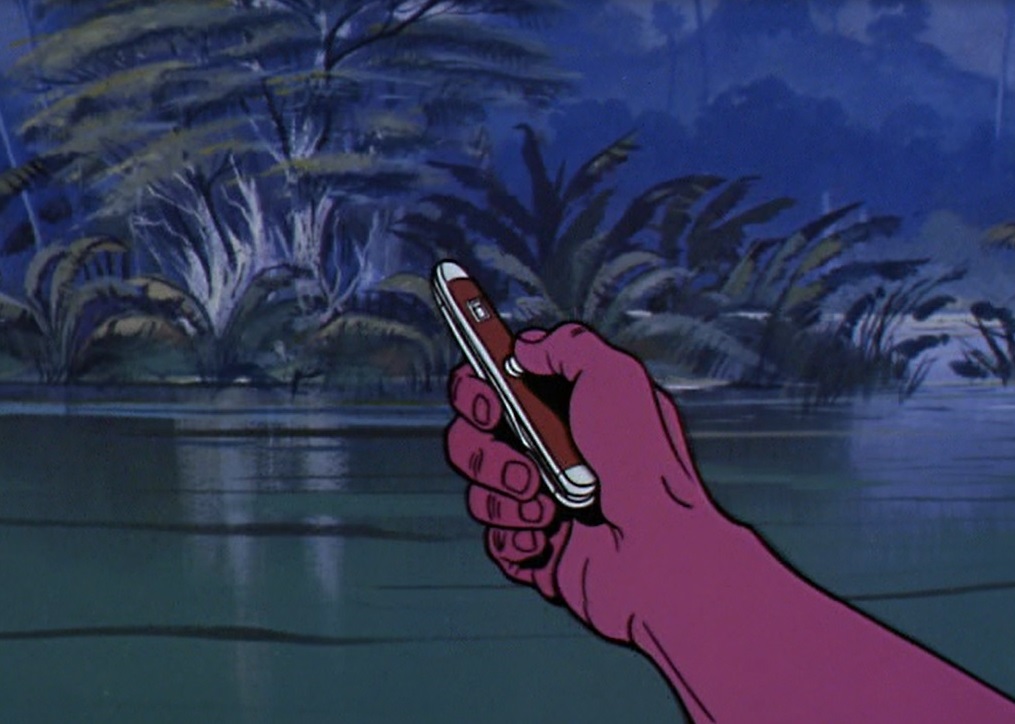 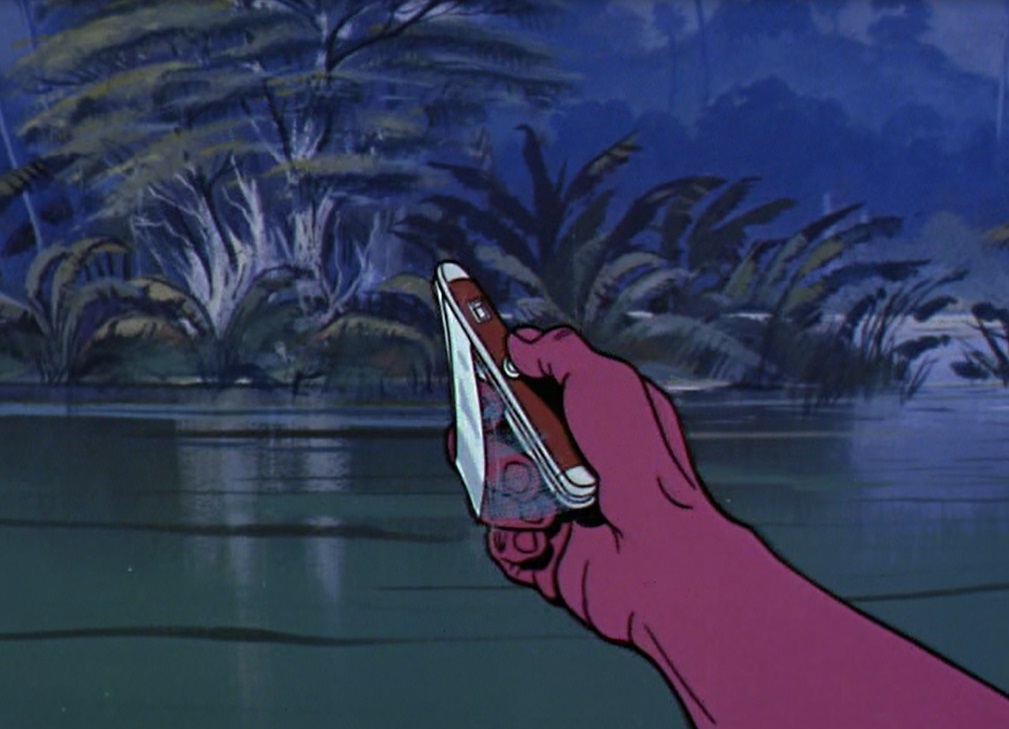 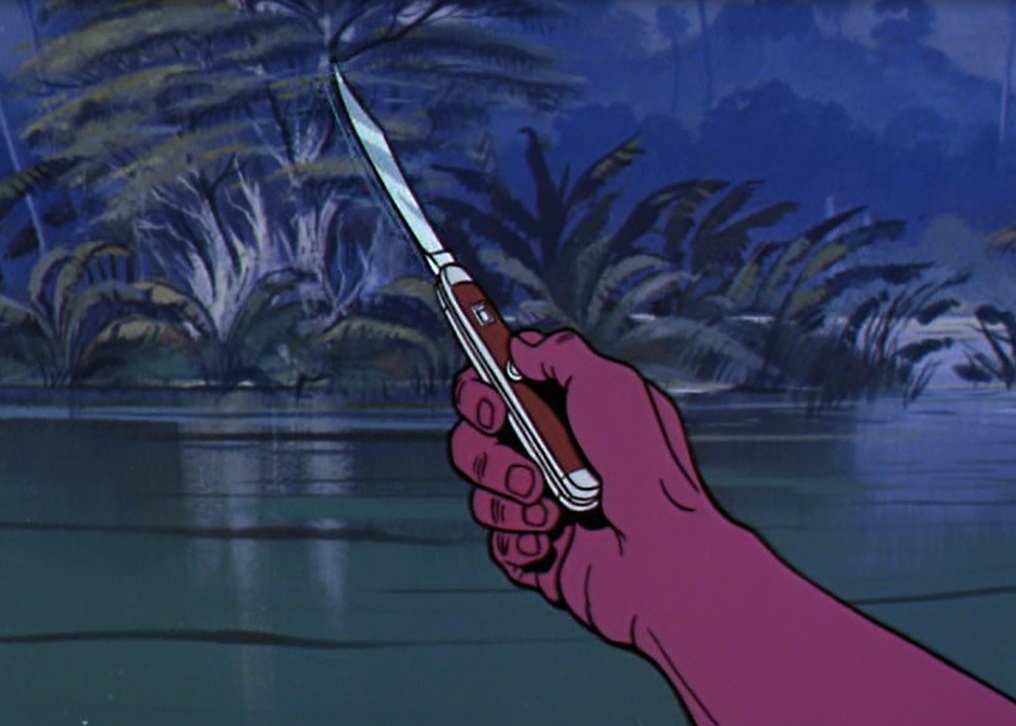 The animator clearly knows squat about these knives; he placed the safety above the button!

Of course this error should not cause any real concern as this series is aimed towards children who should not play with spring steel. The back story of just how this scene was discovered ought to be interesting....
Top

Mr. Natch there are some very interesting facts about the Jonny Quest series. When I was a kid in the late 60's I was up at the crack of dawn to watch Saturday morning cartoons.
People got shot, blown up and fall into vats of acid so Jonny Quest did not come on until 1pm most likely because most small children were outside playing by that time.
For instance Race was in a gun fight and one of the bad guys was around the corner of a building and he fired into the blade of a bulldozer ricocheting bullets killing the bad guy.
If you have an interest in art I highly recommend this video about Jonny Quest. They talk about Doug Wildey the animator and how he uses black backgrounds which was never done before in animation and the very realistic scenes and movements of the characters.
In one part of the video they mention details like when a plane lands it must cast a shadow and Doug wanted to capture that.
It is considered science fiction and all the guns used are futuristic and they have flying platforms, rocket belts, lasers and super sonic jets.

As for that switchblade in the photo above I was at least impressed with the lock mechanism being like that on the Colonial Shur-Snap...just in the wrong place.

Back in the early 90's my girlfriend and I wanted someone like Spielberg to make a movie of Jonny Quest. We had Harrison Ford picked for Dr. Quest. 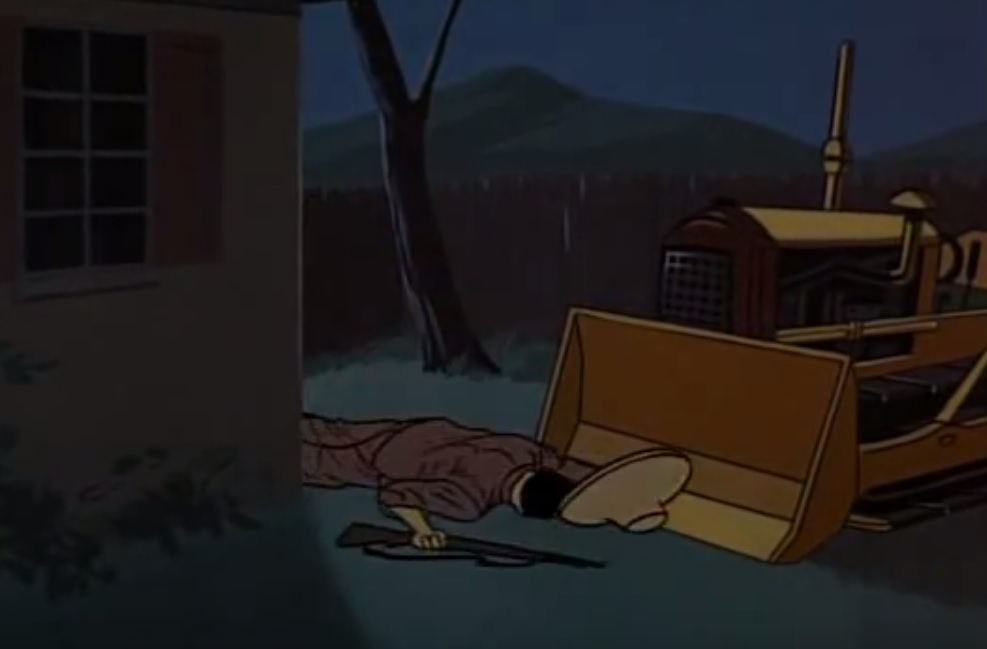 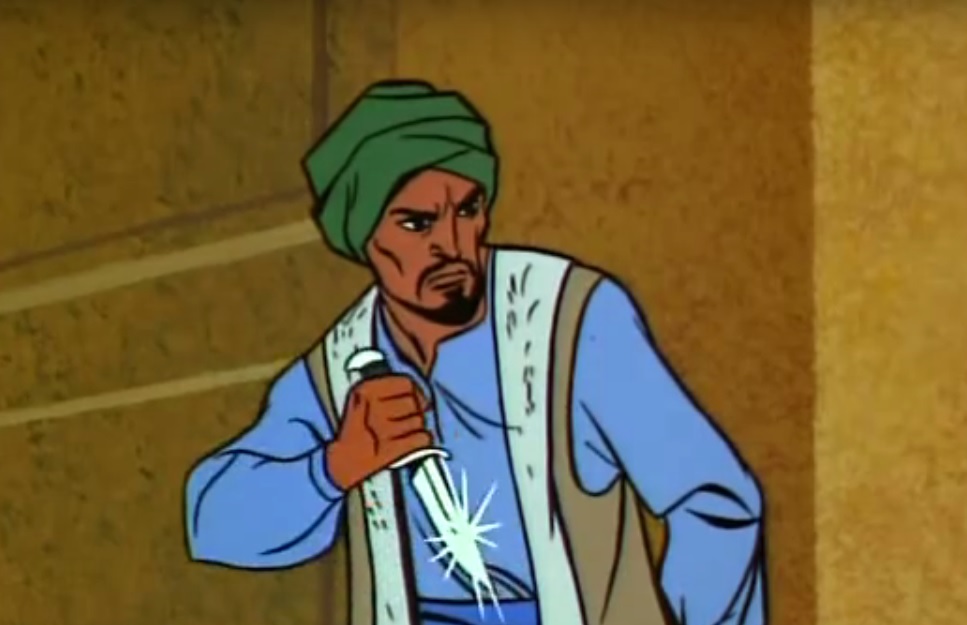 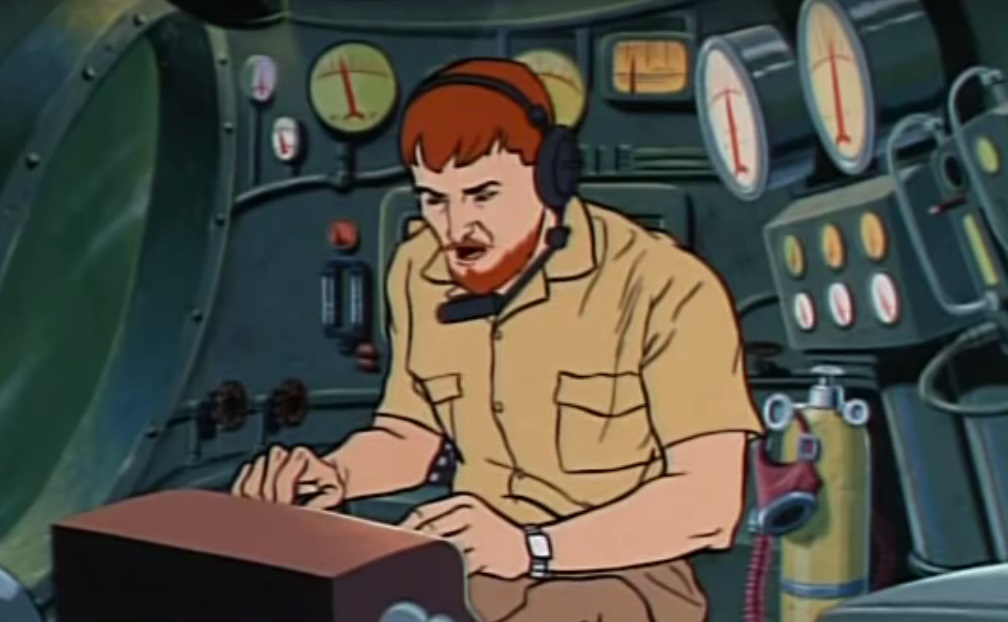 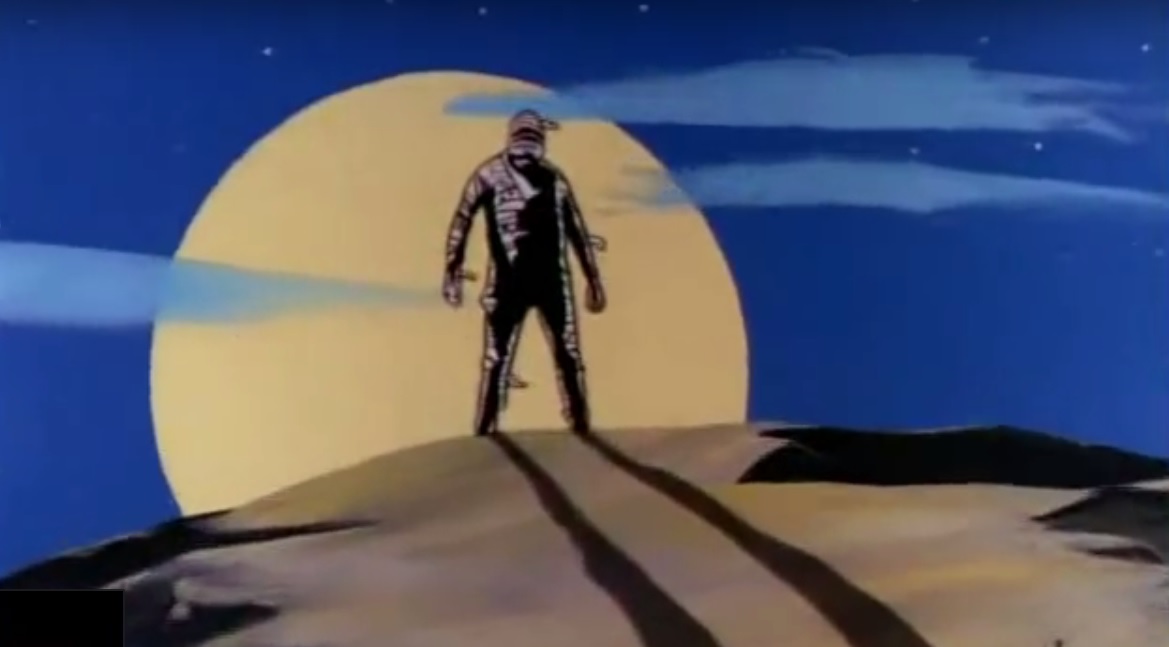 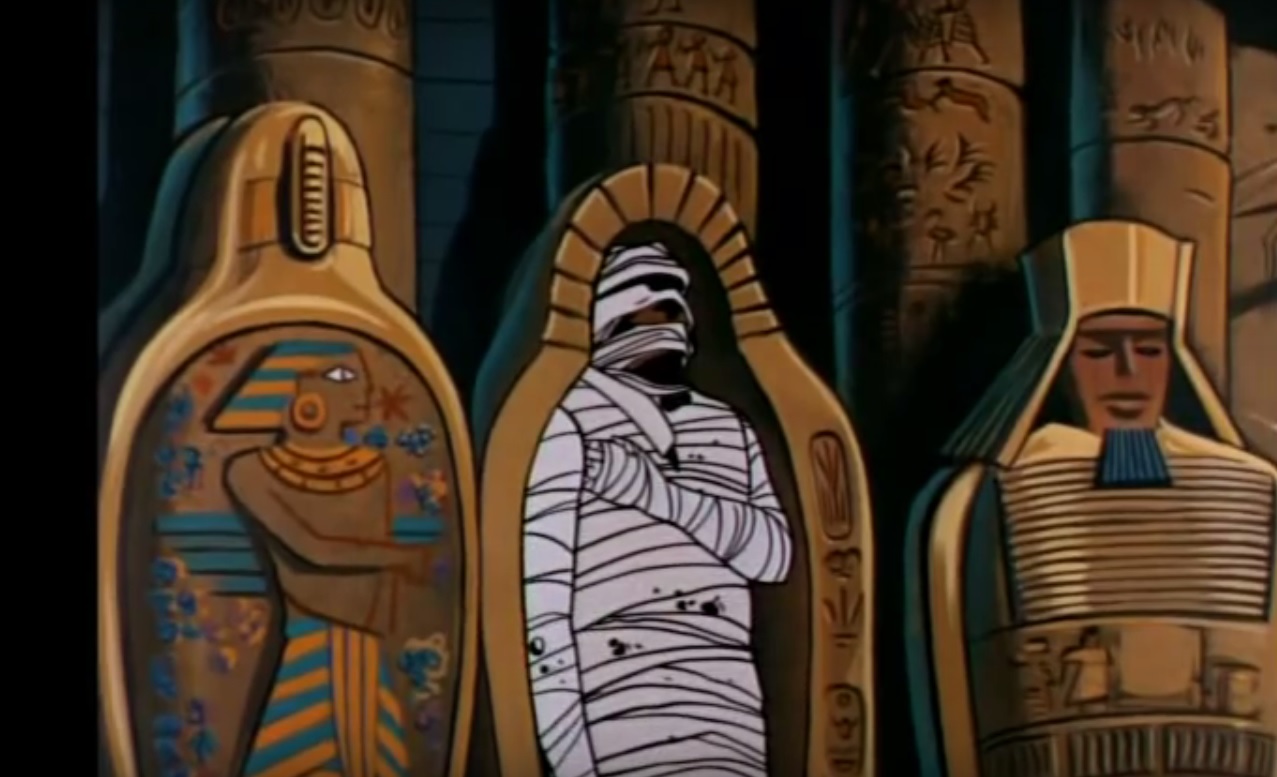 That was my favorite cartoon!
Top

I grew up in an earlier age. The best adventure animation I remember was the 1940's Superman cartoons that were broadcast on TV in the 1950's. Check out some of these episodes. They include use of largely black backgrounds, shadows, interesting / frightening villains and monsters, realistic movement of characters, etc. The creators of Jonny Quest were clearly influenced by this earlier production.

CLUTCH CARGO FREAKED ME OUT !!!
Top

I liked clutch cargo too;
Top

Viking45 wrote: As for that switchblade in the photo above I was at least impressed with the lock mechanism being like that on the Colonial Shur-Snap...just in the wrong place.

LOL! That's hilarious. The artist was clearly using an actual knife for the drawing...how could he have gotten something that upper safety like wrong?

The only thing I could guess is that he wanted to have the detail of the safety on the knife but because the thumb would cover it up, he just moved it above the button.
Top
Post Reply
1919 posts